Formal House is home to a range of talented, creative and innovative businesses.. 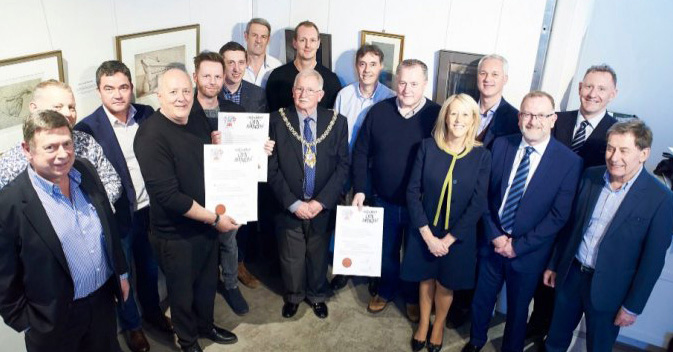 Formal Investments was presented with the Cheltenham Civic Award for the restoration of Formal House at a ceremony at Chapel Arts last night (10th April).

The annual awards are made by Cheltenham Borough Council in association with Cheltenham Civic Society to encourage and recognise standards of excellence in the restoration of historic buildings and other improvements in Cheltenham’s built environment. Previous winners include; The Play House, Pittville Gates and Zizzi’s Restaurant.

Formal House dates from the Victorian era when it was the depository for removal and storage company Barnby Bendall & Co (1839-1976). In the 1980’s and 90’s it was divided into self-storage units and was also home to Pockets Snooker Club. The building has now been transformed into contemporary urban office space with a new glass fronted extension, meeting rooms, a secure cycle store, changing facilities and breakout areas including a landscaped courtyard which doubles as event space.

Bruce Buchanan, Convenor of Civic Awards said the award was made to Formal House because the panel was impressed by; “The quality of detailing and the retention of existing features which gives a link to the past use of the building.” He commented; “It is obviously an attractive place to work. The new addition makes a fitting contrast to the original building”.

Nicholas King, managing director of developers Formal Investments said, “We are delighted to receive this award and, that our goal of creating desirable and efficient work space, while retaining the soul and character of this historic building has been recognised”.

Formal House tenants are an active bunch on Twitter. Why not follow us and keep up to date with the exciting projects undertaken by the businesses we have here.